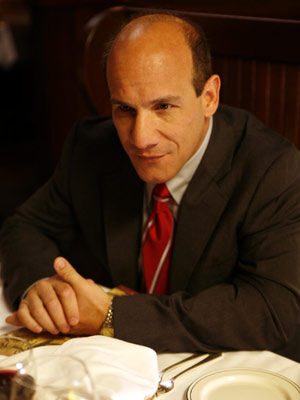 Alan Gray was the head of the Warner Brothers Studio which produced and distributed the movie Aquaman. He is portrayed by Paul Ben-Victor.

In season 2 episode 3 "Aquamansion" Vince refers to Alan as John when they meet to discuss Vince's involvement with Aquaman.

Alan personally likes Vince for the role of Aquaman and was willing to give him $12.5 million for the sequel, but they had a falling out due to his breaking the promise he made to Vince to accommodate the schedule change that would allow Vince to do his dream movie project, Medellin. This led to a contract stalemate.

Vince did not show up to a business breakfast meeting with Alan, so Alan fired Vince and replaced him with Jake Gyllenhaal in the sequel to Aquaman.

In season 3, after legendary producer Bob Ryan is humiliated and mocked by Ari for failing the sale of Ryan's script on the Ramones band to several studios, Bob sells the script on his own to Warner Bros instead. Knowing that Alan will make sure Vince is not involved in the promising project because of the schedule fiasco in the previous season, Ari tries in vain to stop Bob from signing off the script sale.

In season 5, Ari tees off against Alan in a golf match with Alan's "pro" Phil Mickelson and Bob Ryan, attempting to gamble Vince into Alan's newly acquired project "Smoke Jumpers." After a clear victory for Alan, he loudly rants to Ari about how much he hates him and Vince, giving himself a heart attack, from which he later dies.