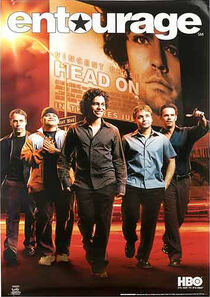 HBO presents Entourage, the hit comedy series executive produced by Mark Wahlberg that takes a look at the day-to-day life of Vincent Chase, a hot young actor in modern-day Hollywood, and his entourage. He's brought with him from their hometown in Queens, NY: manager Eric Murphy, half-brother Johnny 'Drama' Chase, and friend Turtle. The series draws on the experiences of industry insiders to illustrate both the heady excesses of today's celebrity lifestyle, as well as the difficulty of finding love and success in the fast track of show biz. Now that the boys are getting used to the perks of stardom, Eric, along with superagent Ari Gold, keep Vince's star rising while making sound decisions for a long-lasting career in a world of fleeting fame.

The theme tune for Entourage is Superhero by Jane's Addiction. The soundtrack itself is one of the main strengths of the show. Individual episodes feature anything up to 20 songs. The fact that many scenes in the show are located in nightclubs and bars, mean a heavy reliance on rock, hip hop, rap, and R'n'B, though other genres feature as well. Modern artists like Jay-Z, LL Cool J and the Black Eyed Peas line up alongside classic bands like the Allman Brothers Band, Creedence Clearwater Revival and Lynyrd Skynyrd. Producers often take the opportunity to show case one artist in a particular episode.

Retrieved from "https://entourage.fandom.com/wiki/Entourage_(series)?oldid=5747"
Community content is available under CC-BY-SA unless otherwise noted.