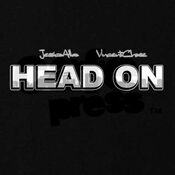 Head On is a 2004 crime-thriller/mystery film starring Vincent Chase and Jessica Alba.

The film was released and produced by 20th Century Fox, and Vince was paid $2 million dollars for his role in Head On. The movie grossed $18.6 million dollars during its opening weekend and was a breakthrough role for Vince.

Retrieved from "https://entourage.fandom.com/wiki/Head_On?oldid=6184"
Community content is available under CC-BY-SA unless otherwise noted.