Monica Keena
Kristen is a recurring character in Entourage. She is Eric Murphy's on-and-off girlfriend and a psychology student at University of Southern California. She is portrayed by Monica Keena.

Prior to and throughout the first season, Kristen's had a stormy relationship with Eric that culminated in numerous breakups. However, despite their predicament, Kristen and E reconcile and it was Kristen's encouragement that led Eric to formally ask Vince to be Vince's manager at the end of season 1. 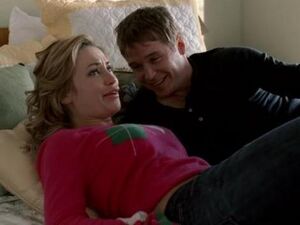 At the start of the second season, Kristen - who cheated on E during the shooting of Queens Boulevard in New York- and E - who also cheated on her the day before with a model at actress Jaime Pressly's beach party - say goodbye and part ways for good.

Retrieved from "https://entourage.fandom.com/wiki/Kristen?oldid=6610"
Community content is available under CC-BY-SA unless otherwise noted.