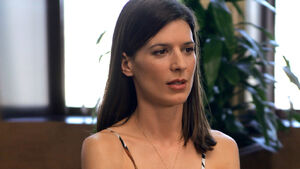 Perrey Reeves is an actress who played Mrs. Ari on Entourage.

Born in New York City, she was raised in the countryside of New Hampshire with a family who preferred not to own a television. Her educational background ranged from years abroad in France and Italy to the Ivy League colleges of the United States. Drama studies were what really interested her, resulting in her choosing an acting career.

Retrieved from "https://entourage.fandom.com/wiki/Perrey_Reeves?oldid=5659"
Community content is available under CC-BY-SA unless otherwise noted.