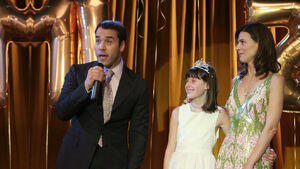 Sarah Gold is a recurring character in Entourage. She is the daughter of Ari Gold and Mrs. Ari. and the older sister of Jonah Gold.

The older of Ari and Melissa Gold's two children, Sarah is depicted as the more sensible member of the family. Being "Daddy's little girl," Ari takes it upon himself to protect her from any unwanted attention at her age, although he claims Vincent Chase is her star crush (revealed in the Season 2 episode "The Bat Mitzvah").

In the season 3 episode "Dominated," Sarah begins to like child actor Max Ballard who just moved in across the street from the Gold house, unsettling Ari. Their relationship comes to an end when Max goes to Kazakhstan to shoot a new movie, which unknown to Sarah, was Ari's plan to get him away from her.

In the season 4 episode "The Day Fuckers," Ari pulls out Sarah from her exclusive private school upon discovering that her brother Jonah would not be admitted the following school year. She returns in the Season 8 episode "Motherf*cker," when she gets angry at her father because he promised to introduce her to Taylor Lautner (he failed to appear for a meeting at TMA). A heart-to-heart talk between them in the series finale eventually prompts Ari to resign from TMA

Retrieved from "https://entourage.fandom.com/wiki/Sarah_Gold?oldid=6505"
Community content is available under CC-BY-SA unless otherwise noted.